You are: Home > Weight

Choose a unit of Weight to convert from:

Strictly speaking and in terms of Physics, the terms mass and weight mean different things. Mass describes the amount of an object there is, where weight would describe how "heavy" or how much force that object is creating in its current environment (and would normally be measured in Newtons). For example. Someone that 'weighs' 60kg on Earth would only 'weigh' 10kg on the moon but their mass would stay the same.

For the purposes of this website and because the majority of visitors will be looking to convert weight in terms of units of mass; we are going to consider them the same thing.

Weight (or mass) has been around since humans have been communicating. To describe the size of almost anything would be to reference the weight; including humans themselves, food or goods to trade. As technology has advanced, so has the need to express weight more and more accurately.

Early forms of weight measurement include comparing (using balancing scales) one object to a number of actual stones (hence the term stone). This clearly came with accuracy issues and has since been revised a number of times.

The base unit for weight (mass) in the Internation System of Units (SI) is the Kilogram - kg.

The majority of conversions of weight these days is either when measuring weights of humans from pounds (common in the USA) to kg (common around the world) or from stone, pounds and ounces (common in the UK) to kg. This has made the kilograms to stone converter and the stone to kilograms converter very popular tools.

The unit of kg, however, is becoming more and more prevalent as time goes on. 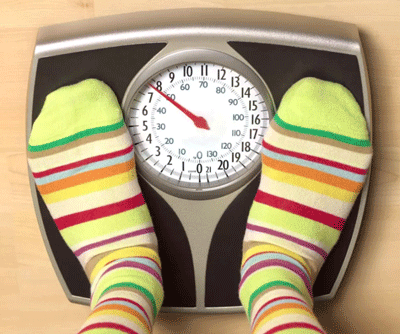 A set of scales; used for measuring the weight of a human. These are calibrated for use on Earth!